I got lucky! I was surfing around online searching for saggy longline spots, as I have done many times before. I came across a potential dip not far from Bern; approximately 600m between two small patches of forrest.
Motivated by this rare finding, I mentioned it to Yves, one of my old-school longline buddies. We talked through some details and the tension seemed to be okay for such a line. We aimed at a maximum of 10-12kN while walking.
There was only one challenge left… quite a substantial one… there isn’t a 600 meter long piece of webbing in Bern!

Step by step: First tries on a 600m looongline from SLACKATTACK – Slackline Crew.

The day after the discovery, I can’t let go of the thought that we have such a premo spot but no webbing, so I came up with a plan. I have a 340m dyneema line borrowed from Landcruising.de, Jérémy Folly gave me his 160m of Moonwalk from slack.fr at the beginning of Winter, since he spends the winter season on skis, and I myself almost forgot that I still have a 100m piece of dyneema laying around. That adds up to about 600m! I’ll need to get them sewed together…
That same morning I visited a local shop: «Läderbutigg Bärn» a leather specialist with several industrial sewing machines. The owner, Felix Kohli, looked a bit surprised when I told him what I was planning, but nonetheless he was optimistic that it could be done. About 45 minutes later I had a 600m piece of webbing – nice!
After work, I met with Benoit Spycher. Instead of doing office work for Swiss Slackline, we decided to go check out the new spot. After a 20 minute drive, we discovered that the farmland belongs to five different farmers spread across the two villages in the area. We managed to find the farmers personally or call them and they agreed to let us rig our line over their fields for the following day.
Later that evening, Pascal Jetzer showed up at the Slackvilla and helped me visually check the webbing, attach windstoppers and nicely repack it.


It was only Friday; two days after I found the spot and I woke up early. The plan was to prepare two complete 6:1 longline pulleys with about 60m of static rope; one for each side. We wanted to be able to adjust tension while walking. I knew that this was going to be a challenge since we gained some experience on this new age longline topic over the past couple of months.
I convinced Oli (with his drone) and Marc to help. We arrived before lunch and had a 620m line rigged in less than two hours. In the middle of the line we found a gully with a «syngenta» sign… don’t want to know what they are up to there.
We managed to walk the first 100m without issue, but we had some problems with the dip and the first 80m were going over some manure, colloquially known as cowshit. The wind was angry my friends, and it was damn cold. I also cut both of my feet on the first tries. Looks like I’m wearing shoes for the next few days.

On the second morning of longlining, first we re-rigged the line to 600m which suited the shape of the dip a lot better. The line felt good and some longliners from Bern showed up. Most managed to walk the first 30-50m. I had some good tries almost to the 150m mark and Yves got a bit further to about 180m. We had to adjust the tension of the line to the bodyweight of each individual longliner and we also had to tension and release while walking. Standing tension in the beginning was between 5 and 6.5kN. Glad we had the dyno built in, it really helped a lot!

We stayed at the spot and slept in the forest, the entire neighborhood became aware of us, they brought coffee in support of our project, how cool was that, thanks Nicole!

More longliners showed up, the wind was rough on us today and it was cold, changing directions, wind gusts were the normal case and the sun was hiding all day. I knew Ando and Marc probably had to best chances today. Both, including me now walked the first 200m and Marc had one good try, probably up to 250m mark. That was going the be the best try for this session. After a short session with Benj we derigged the line in less than an hour. We will be back, more to come soon.

To summarize, what did we learn so far:


– Plan your spot and rigging in advance, it will save you hours of time on site
– Get the landowners/-managers on your side
– Choose your longline spot wisely, not visible and accesible for everyone, away from traffic (distraction), otherwise you can’t leave your line up
– Wind is a huge factor, nothing new, but definitly worth studying in detail
– Windstoppers are important too
– Tensioning and detensioning while someone is on the line can be dangerous for the people handling the pulley, ideally don’t use the multiplier if you can (high efficiency pulleys), never position yourself or any body part above the pulley while someone is on the line. Actively warn unexerperianced people about the dangeours involved.
– Walk in direction where you can detension, way easier 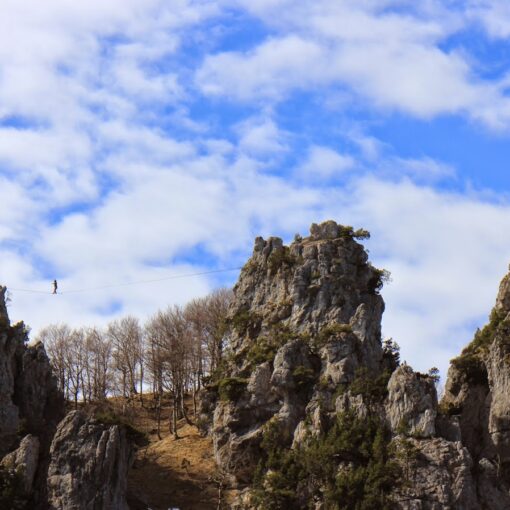 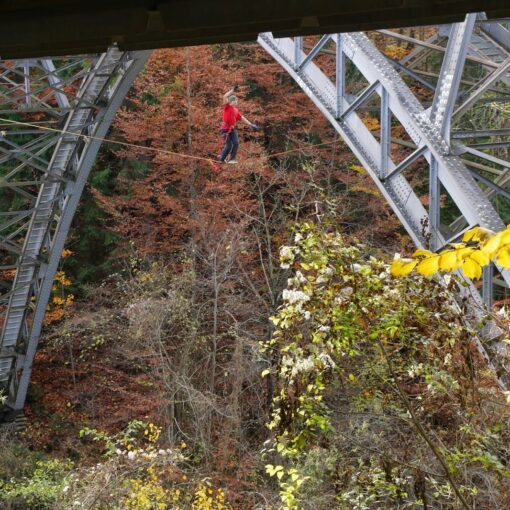 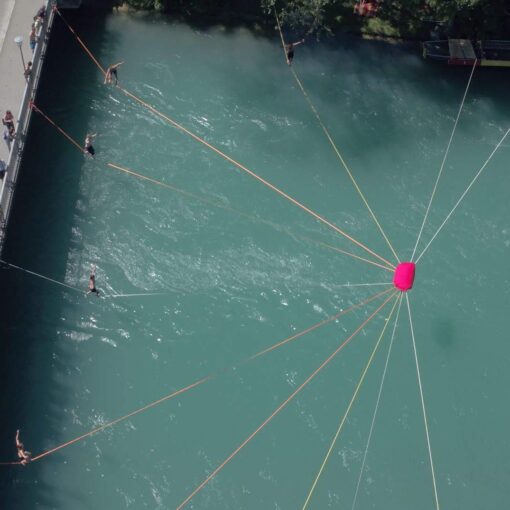 The Eleven Slackline Spaceline! No Preparation needed A new batch of lines between 15-30m arrived at the slackattack villa for beginner workshops […]